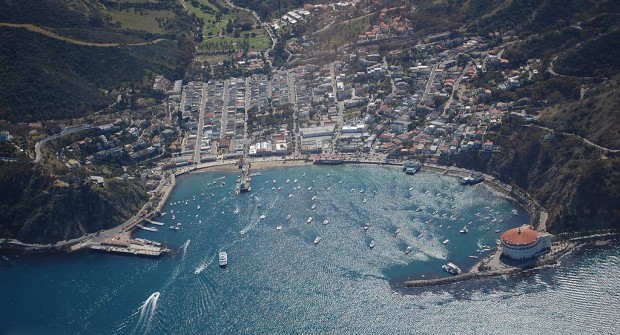 The History of Catalina Island

The oldest known history of Catalina Island goes back several thousand years, to when the Tongva tribe lived on the island. The tribe called themselves the Pimugnans, and the island Pimu or Pimugna. Archaeological evidence from middens on the island suggests that around 2000 B.C., as many as 2500 people lived on the island. In 1542, Spanish explorer Juan Rodríguez Cabrillo claimed the island for the Spanish crown, and named it the San Salvador, in honor of his ship. Sixty years later, another Spanish explorer rediscovered the island on the eve of Saint Catherine’s day, and gave it its name to this day: Catalina Island.

By the 1830s, the entirety of the island’s population had died from diseases bought by the Spanish colonists, or gone to work for the California missions, or as ranch hands on the mainland. The island became a major smuggling point and hideaway for pirates, with its many hidden coves and its proximity to the California mainland. China Point, on the southwestern side of the island, received its name from being a smuggling depot for illegal Chinese immigrants.

In 1854, Catalina Island experienced a gold rush, thanks to three Otter hunters. George Yount and Samuel Prentiss had been searching for 30 years for some buried gold treasure that was supposedly on the island. They both died in 1854, but not before finding a promising sample. News of this finding brought in Stephen Bouchette, who staked a claim, and raised $10,000 in funding after stating that he’d found a rich vein of gold. These funds were used to dig tunnels that stretched over 800 feet, although some people claimed that instead of searching for gold, he was attempting to find the buried treasure. In 1874 he and his wife loaded their things onto a sailboat and left the island, never to be heard from again. No one has been able to determine whether he did eventually find the treasure, or simply gave up in despair. Stephen was not alone in searching for gold however, and by 1863 as many as 70 miners were scouring the island for shiny metal. In 1864 the Union Army shut down the island, evicting all of the miners, and foiling the plans of Confederate sympathisers to outfit privateers. The oldest building on the island is the Union soldiers’ barracks, which is now the building for the Isthmus Yacht Club.

As the 19th century was coming to a close, and America was making strides forward in science, manufacturing, and technology, and becoming a wealthier nation, tourism began to flourish. George Shatto saw that Catalina Island could make an excellent tourism spot, and proceeded to buy the island for $200,000. He started the settlement that was to become the town of Avalon, and built the island’s first hotel—the Hotel Metropole. Unfortunately, Shatto wasn’t able to make enough of a profit early on, and ended up defaulting on his loan. In 1891 the island was once again bought for the purpose of tourism, this time by the Banning brothers, sons of American businessman Phineas Banning. The Bannings had better luck, and developed Avalon into a proper resort community, made roads into the island’s interior for stagecoach tours and access to hunting lodges. The new roads also enabled tourists to get to Descanso Beach, Lover’s Cove, and other locations, from the town of Avalon.

In 1915 disaster struck, and a fire on the island destroyed half of the island’s buildings. A combination of the debt incurred during rebuilding, and a decline in tourism as a result of The Great War forced the Banning brothers to sell the island in 1919. This is when William Wrigley Jr., the great chewing-gum magnate, took possession of the island. It’s thanks in large part to him, his wife Ada, and son Philip, that the island is what it is today. They invested millions of dollars into infrastructure for the island, and constructed the Catalina Casino, one of the island’s greatest attractions. Once the island was developed as a fantastic place for tourists, the next step was to get the tourists to actually come. Wrigley did this with a number of public spectacles, like bringing the Chicago Cubs (who he happened to own) to the island for their spring training in 1921 (with the tradition continued until 1951). He also held an ocean marathon, awarding the first person to swim between the mainland and Catalina Island.

During World War II, the island was shut down for tourists, and used as a training location for the military. Since the close of the war, the island has continued to be a beautiful and engaging place for a vacation—or even just a fun weekend, with a fairly temperate climate, great beaches, and an abundance of great activities and attractions.

Josiah works primarily in web development and writing, and once wrote a 50,000 word (unpublished) novel in a month. He also loves to travel, and explore different cultures and locations.

Things to do on Catalina Island